We had Rugged Cross Outdoors (RCO) do our April 2018 Wild Game Banquet in Sheboygan, Wisconsin. This was our first ever wild game banquet. Tom met with us prior to the event and provided a lot of great ideas for how to make our event successful. We prayed together, we planned together and we anticipated this event together. As the event approached, Tom and Andy prepared (their presentation and video footage was great), communicated (we were all on the same page well in advance) and then executed the plan for the night with professionalism and excellence. We had a great attendance, and so much food! Our event was an outreach event. Everyone in attendance heard about the love of God in Christ Jesus, and several responded to a call to submit to the Lordship of Jesus Christ. For Tom and Andy the speaking engagement at our church was not the end goal. Their end goal was that men hear and respond to God’s call on their lives and to make relationships so that they can be involved in the next steps that men need to take to follow God, in Jesus Christ. We hope that our men now view their love of the outdoors as a great place to start conversations with their family and friends about the greatness of God. I highly recommend RCO and look forward to continuing in partnership with them going forward. 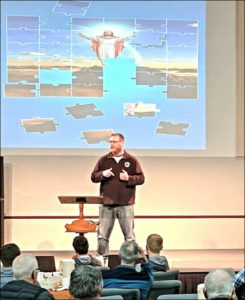 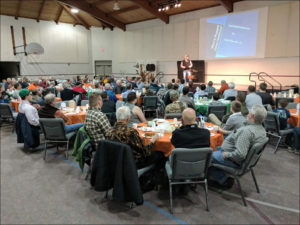 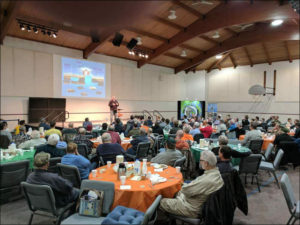 “Thank you so much! Even though I didn’t catch a fish, I had fun! Thank you and God bless you! I have never met such nice guy’s that care so much for others!”

“I can’t believe what you guy’s do! It’s amazing that there are people out there that care so much for people like my son!”

“Thank you very much, Jackson had a blast! He told me that he hasn’t been ice fishing in years and he asked if we could come back down again; I told him we would try. Thanks again for what you’ve done for him!”

Some comments from people attending the event

“Andy Kaminski did a great job of sharing his passion for the outdoors and hunting but clearly presented the passion he has for all in the audience to know and follow God. The plan of salvation was clearly presented, which is the reason we gather men and boys together for our Annual Game Dinner. Jim Duflo and Tom DuBois also attended and were great encouragers to our men’s leadership team and all the men who attended from our community.”

My daughter Renee and I would like to express our sincere thanks for the opportunity to attend the youth doe hunt near Dayton Pennsylvania. We had the pleasure of spending all day with Tom DuBois, the camera man assigned to us. The weather was not the greatest, but the company was! It was also a pleasure to meet Anthony Infante, we had heard great things about him and found it all was true! We met quite a few people and all of them were really nice. the whole experience was awesome! Again, thank you and we hope to do it again next year!

James Stallings here. Just wanted to let everyone have a chance to get to know a Christian organization that does not help any children at all, just kidding, lol………..Tom DuBois, Andy Kaminski and Rugged Cross Outdoors provide miracles for children with disabilities or who have a terminal illness. My autistic son (Christian “Bebo” Stallings) with severe pulmonary problems and I were the recipients of the first bear hunt awarded by RCO. Let me tell you, the long trip from Alabama to Minnesota was worth it. Not only did RCO help with the fuel and hotels on the drive up and back, but they also helped us get our bounty home. We arrived at Mr. Darvis Russell’s (our guide and host for the bear hunt) home around 2:00 am. Darvis was a blessing, as was his entire family. Mrs. Russell cooked wonderful meals daily and even made Bebo a birthday cake while we were there. Darvis gave us the safety talk and showed us on a map where he put all the stands. We then suited up and hit the woods for Bebo’s first night in the stand. We were there maybe 30 minutes and out came a huge boar bear! He came right in to the bait, Bebo steadied his aim and BOOM, he put the smackdown on the big beast. That night Darvis took us to a friend of his house to clean the bear. The next day I was surprised when Tom DuBois said that RCO wanted to bless me with the chance to hunt a bear too. My first night we had no luck. The second night Darvis sat beside me and Tom sat behind us filming. After an hour a big sow bear came in, she walked past the bait and then proceeded to start climbing up our stand! I didn’t know if my bladder would hold or not! She eventually turned around and went back to the bait and I successfully took my shot! I must say that watching my son out in God’s creation and just spending time in His presence was so fulfilling to me as a father. Also getting to harvest an animal was a surprising miracle in itself. I also enjoyed snagging some treats out of the bait bucket too…..lol. Being part of four men in God’s creation, conversing about Christ and helping bring a father and son closer to each other and closer to God was truly amazing! Tom DuBois and RCO will forever be on my lips in prayer and our hearts shall hold the meaning of the friendships forged thru Christ. Many blessings and provisions we hope will befall on RCO as it grows in the Lord, the disability community, the hunting community, and the outdoors as related to the film industry. May it be blessed with much spiritual fruits and Holy thanks.

P.S. I can’t wait for America to see two fat guys in a little tree stand…..lol.

RCO is Making a Difference!

This is how RCO is impacting lives around the world in the name of Jesus Christ! (click on picture above to watch video)